I surveyed the smart and tidy speedboat with its bright yellow canopy. I gazed at the inviting and sparkling river. It was a beautiful, sunny day filled with promise. My surprise father’s day gift to my husband of renting a boat had been received well. I dismissed my son’s fear.

“Don’t worry, Jack. It will be fun. The boat will not sink, and even if it did, you are wearing a life jacket and there are plenty of other boats on the river to ask for help if we have a problem.” I perfunctorily lifted him into the boat while the boat rental guy provided brief instruction to my husband and teenage son, Chase. My youngest daughter Grace studied Jack’s consternated face and her expression became pinched and wary.

“It’s okay, Grace.” I deposited her beside her brother. I followed afterwards awkwardly, as I am not a seafaring gal. My teenage daughter settled herself into a seat and lounged comfortably while perusing her smartphone. The boat rental guy completed his information spiel and exited. My husband positioned himself behind the wheel with Chase close behind. We were underway.

The first order of business was to take a few pictures to commemorate the occasion. My second priority was to snap open a Coke and begin passing out snacks.

I adore wind and one of my favorite things in my few boating experiences has been the brisk wind that speedboats create. I commented that we were not experiencing much wind. Chase mentioned that the boat seemed sluggish and my husband added that the speedometer didn’t seem to be functioning properly. We dismissed these observations and continued on our way.

About an hour into our journey, Chase pointed out that the motor was too low in the water. My husband put the boat in neutral and the two them peered over the back and discussed the situation. Shortly thereafter, water began seeping into the backend of the boat. Grace exclaimed that our flipflops would float away and went to rescue them. She brought them to the front of the boat and placed them next to Jack who was observing the situation with mounting concern. Two passing boats asked us if we needed assistance. We told them that we believed we were okay.  We decided that it was prudent to call the boat shop. They told us not to worry because the bilge pump was automatic and would take care of any excess water. The bilge pump did not appear to be functioning. The storage compartment began filling with water. We moved all of our items and ourselves to the front of the boat. My husband manned the wheel and Chase bailed. We called the boat shop again and they still did not seem overly concerned. Jack began to cry and Grace cuddled closer to me. Water continued to creep into our craft. Again my husband stopped the boat and called the shop to tell them that we required assistance. He was told to restart the engine. At this point the engine would not engage as it was underwater and now oil became included in the mix. A compartment in the middle of the boat opened exposing buoys and more water where it should not be. It was then that it occurred to me that we were really sinking.

One of the boats that had previously offered assistance came back and we gratefully abandoned our ship. Chase and my husband stayed behind to continue to bail and await the arrival of the shop’s assistance. We hovered nearby safely in the kind family’s boat until help arrived. Chase and my husband then joined us. A dolphin circled the smart and tidy speedboat as the river swallowed it.

This is a true story although I have changed the names. My family has sustained no injuries, but currently the boat company is insisting that we are liable for the cost of the boat. The inspection showed no hull damage of any kind. They cannot tell us what caused the boat to take on water and sink, but they insist that it is our responsibility.  We did nothing to incur any damage to the boat. Apparently, we are going to have to obtain legal assistance to try to prevent being responsible for the cost of a $64,000 boat. Any advice would be greatly appreciated! 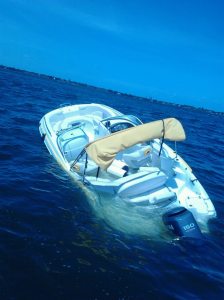 A Song For The Heart