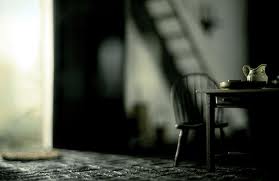 And then she ventured into the place of her dream. The familiarity did not strike her all at once. It ebbed in gradually as she progressed. Perhaps it was the shadows of the journey that had distracted and numbed her mind from remembering. The dogged persistence of pushing forward had consumed her and the darkness around it had threatened to engulf her. The storm she had just passed through had been relentless and there had been no shelter. Her long hair was still stringy and dripping from it when the path she walked began to seem somewhat familiar. At first, the recollection came as a distant glittering in the back of her mind. When her thoughts turned to grasp at it, the fragments of memory teased and then flitted into nothingness. And so she continued to trudge along her solitary mission and tried to focus her weary mind on any further clues which might present themselves. Doubt gnawed at the fringes of her determination as she allowed herself to wonder if her direction was faulty or that her quest was for naught. In these moments it felt as though her skin was prickling from the inside and that her spirit was desperately railing against its’ enclosure to no avail. Sometimes she was sure she would succumb to the crushing despair. But during the silence and stillness that would follow she would find the slow and steady pulsing of her brightness and the certainty that she must continue onward. She found herself reflecting more often upon the days of her youth when she used to dance with the fairies. The rippling laughter of her brightness seemed distant and foreign to her now. Back then, the enchanting sprites had whispered to her of more substantial endeavors that she must pursue to ensure that the brightness did not fade. They hinted in their song that there was searing light that must be embraced for a larger purpose. She had brushed aside their warnings at the time and resisted their urging as her brightness dimmed and ceased to become the tonic it was formerly to the world around her. When the dreams began, she regretfully realized that her quest must be embarked upon just as others of her kind had done before her. All had individual journeys and obstacles to face. Some returned brilliantly bright, but many more became bogged down with the challenges that befell them and perished along the way.

The orange sun became dominant over the blue sun and the intense heat of it caused steam to rise from her clothing and the ground all around her. The Cremoria flowers along the crooked trail swayed slightly in a sudden murmuring breeze as she brushed past them. They were colored with the most amazing shimmering purple just as she had seen in her dreams. They seemed to beckon and encourage her. She thought she even saw the translucent tip of a fairy’s wing whisking between the stalks. It had been so long since she had seen a fairy that she was sure her eyes were playing tricks on her. Nevertheless, her heart leapt for an instant and she quickened her pace. The tiny thrill of excitement was replaced with a quiver of apprehension. What would she find at the end of this increasingly familiar path? Would it break her heart beyond repair or infuse her with a higher brightness?

Quite suddenly she realized that she had come upon a cottage. It was carefully camouflaged and she had almost walked right past it. The rustic structure completely blended with the gnarled trees entwined around it. She stopped abruptly and felt the silence from within reach out and clutch her. She gazed upon a home that she felt like she had known all of her life. And they were waiting inside. Hesitation would not do. She quieted her mind and opened the door.

The room that stretched before her was long and colorless. Dim light filtered in beams through small, high windows. The feeble glow did not illuminate much detail in the many hues of gray. Two even rows of chairs lined the room. Seated in these chairs were nondescript men dressed in the same grays that pervaded the entire room. They turned their faceless heads toward her as she entered the room. They knew her and she knew them. They acknowledged her without a sound or movement. She stepped further into the room and closed the door. She waited. All was still for several heartbeats. Then a soft rustling sound came from a room to her left. The door was ajar. A dazzling white ball of fur with sparkling tips rushed from the doorway. With surprise, she recognized her own shimmerdog. He had disappeared years ago when the dreams had begun. His fresh brightness glowed in the pale room. She had not expected to see him again. She reached down to pet him, but he demurred.  Instead, he insisted that she follow him into the room from which he had emerged. Someone or something crucial to her quest waited behind that door.