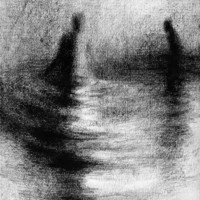 “Strangers’ Angels” is the sequel to my novel “The One That Got Away”.  Although it is still a Work In Progress, I am sharing a piece of it with you.  Below is an excerpt from Chapter 10 of Strangers’ Angels…

Anna lugged the overflowing laundry basket down the stairs to the lower level laundry room of her apartment building. Interspersed amongst Anna’s own clothes were a few of Kate’s dirty articles that she had begged Anna to wash. Anna struggled to slide through the doorway before  the door slammed shut behind her. She set the basket down abruptly next to the row of washing machines and took a moment to wrestle escaping strands of hair back into her hair clip. The dingy room was not air-conditioned and Anna could feel the stuffiness and heat enveloping her body and the musty smell of damp clothes and old concrete invading her nostrils. She brushed at the perspiration on her neck and forehead and contemplated how to jam the door open. She glanced around the dim room for an appropriate propping object and found a large, irregularly shaped rock by the entrance. Most likely, it was there for the very purpose she intended. Anna opened the battered gray door and moved the rock into place with her foot. It was heavier than it looked.

Anna’s scalp unexpectedly prickled right before a wave of cool air pushed its way from the far corner of the cramped room. Anna immediately turned towards the fresh air and involuntarily shuddered as it struck her chest. Her eyes scanned the recesses of the dark corner and became adjusted to reveal a shabbily dressed woman limply holding the hand of a scruffy little boy. The woman’s face was worn and seemed aged beyond her years. Her eyes held no emotion as her mouth worked wordlessly trying to express a thought. The child stared at Anna with an intensity that was completely unnerving.  Actually, the fact that was most disconcerting to Anna was that she seemed to be attracting quite a bit of attention from the stranded spirit world lately. She was accustomed to glimpsing them occasionally, but in the past, she was not an object of interest to them. She had never sensed a stranded spirit in the laundry room before. She had been here numerous times over the past two years. Why would they be suddenly following her? Anna shivered again and began to hear garbled whispers in her mind. The woman was trying to speak to her but the confusing mixture of multiple voices made it impossible to discern meaning. The child glanced up briefly at the woman and then addressed Anna with a startlingly clear voice.

“They are gathering. Be ready.”

“What? Who?” Anna sputtered in exasperation. She felt like stamping her feet in frustration at the abundance of riddles. She knew it was ridiculous to question a stranded spirit because they never answered. To her shock and surprise, the boy did clarify, at least somewhat.

“The Dark Ones. They are gathering again. Mine, yours, and the ones trapped below.”Anna became aware that the filthy child was surrounded with a pale but definite white glow. This stranded spirit was a Bright One.“At times they gather to fight against their prevention.”

The child spoke calmly inside of Anna’s head. The other voices blended together into a backdrop of vibrant shushing. The tall woman became suddenly agitated. She clutched the small boy’s hand tightly and began to look about the small room with mounting apprehension. She seemed to be expecting something or someone to appear. Anna could feel the approaching presence tickle the back of her senses with dread.

Anna wanted to ask more questions, but knew the time had passed. Their images scattered from Anna’s view just as a purposeful rush of frigid air pushed into the room from seemingly nowhere. The stark light fixture that hung from the ceiling swayed erratically in its wake and small clouds of dryer lint mingled with discarded wrappers leapt into the air and shifted their positions. An empty can of soda skidded across the floor as the purveyor of the disturbance materialized. She was not fully formed and appeared to be just passing through. Her presence scraped across Anna’s brain like fingernails across a chalkboard. A shot of fear jolted through Anna as the Dark One threw a sidelong glance in her direction as she pursued the pair that had formerly occupied the space that she now slid through. She was gone as suddenly as she had appeared. The dust and paper scraps settled leisurely into their new locations and the only sound was the brightly decorated can slowly rolling to a stop.

Things were getting too weird. Anna felt that she had a high tolerance for weird considering the fact that unlike most people, she had the ability to remember past lives and observe those who were trapped in between theirs. However, lately there seemed to be a disturbing trend developing and it was surrounded by a suffocating feeling of dread.

For a limited time the Kindle version of “The One That Got Away” is being offered on amazon for the special price of $3.03. Pick up a copy of it so you’ll be ready for “Strangers’ Angels”!

A Note To My Kids